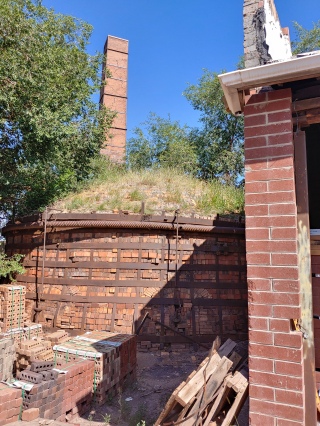 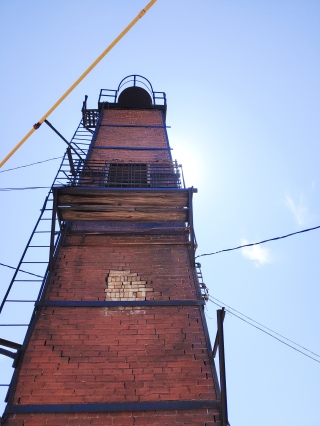 One of Summit Brick’s early ways of firing brick was through a beehive kiln. These kilns replaced our scove kilns in 1922 and were far more effective. With a scove kiln unfired bricks were stacked inside the kiln and then a layer of plaster was put on the outside. This helped to lock in the heat. On the bottom were holes where wood, gas, or oil were lit to provide the heat. Unfortunately, the bricks closest to the fires would often be burnt and those near the top would still be soft.

An improvement from that would be the beehive kiln! This type of kiln is a circular structure made of brick and has a domed roof. Unfired brick would be placed in the kiln and a fire would be started below the ground. This helped to ensure a more even distribution of heat. A flue that lead to a chimney stack increased ventilation and helped to keep the fire burning properly. The hot air was directed upwards, then downwards, then through the bottom of the kiln and through the chimney.

The fire underneath the bricks had to be tended to 24/7 during the duration of firing, which was typically 4-5 days. However, the process from start to finish lasted closer to 14 days due to loading, heating up, firing at temperature, and cooling down.

Eventually, in 1964, Summit Brick started to replace our beehive kilns with tunnel kilns. These helped to lower handling costs, increased fuel efficiency, and created a more uniform brick. Even though these beehive kilns were no longer in use, Summit Brick still has one at our Pueblo plant. We enjoy having that bit of history still in our yard to show how far we have come!